Adrien and Manu are 2 of my buddies, healthy, in their early thirties, one is a footballer and the other one is a tennis man. They are always ready for new challenges and always ready to beat their limits. One day, during one of our chats, as they made fun of my physique, I decided to challenge them: Would they be ready to do something really difficult? We consider our options and there is only one real option: The Mount Ventoux, the giant of Provence that we will have to climb by Bédoin, the most difficult side of the Mount with its 22km of rise at a percentage of 7.1% and a positive climbing of 1 600 meters! The “Ventouse Men” are born…We don’t have any references on the subject: is the objective realizable for 2 beginners in cycling but fit men, what performance can be done? For me, it is a personal “revenge”: the first and the last time that I tried to climb the Ventoux, I had finished on the bus, it was during the cyclosportive stage of the Tour de France “Montélimar - Mont Ventoux” and I had been sick.
Then comes the time for the planning and the physical training for the event. For the organization, nothing easier from : high speed train to , then car until Malaucène where we will rent the bikes and, then the moment of truth.
For the physical training, my 2 friends have been exercising almost every day during two and half months on home trainers at the gym! Adrien likes endurance and he has the body shape that fits well to the challenge, but Manu, a rather massive guy, he will have to carry his weight to the top of the giant. So, it gives him added pressure, until having a tendonitis on his right ankle one month before the day of truth…  But like any champion, he is here on the D-day! And even the day before, because he wanted to face the Giant and to concentrate on the objective on the previous night, the Thursday evening. With his Teddy bear… more seriously, I let you imagine the number of chats, emails exchanged, mockeries between us… for finally only one objective: “Don’t be a tantouse, beat the Ventouse” (Don’t be weak, beat the Ventoux)
Thus, we find ourselves with Adrien at the train station in , on Friday around 6am. The train journey is fine, we take a little bit of energy and Manu is waiting for us at the train station of 3 hours later. In spite of a problem with the booking, we find a car and we leave to Malaucène, to the bike shop where we’ll rent the bikes.  The 12 kilometres between Bedoin and Malaucene allow us to warm up. We discuss, we try the bikes, we laugh, and we have a sight to the top of the Mount. The weather is beautiful and not too hot, in this pleasant area of in . Once arrived in Bédoin, we take a picture of the “Ventouse Men” at the official start line.

It’s the moment of truth.  I leave my buddies since the beginning of the mount, as my own objective is to climb it in less than 1 hour and 30 minutes. I recognize the road, I should say that during the stage of the Tour de France, I was there, lied down against the barriers before getting into the bus…  I overtake a few cyclists and I arrive in 1 hour at “chalet  Reynard”. 27 minutes later, I cross the finish line in the top of the Ventoux. I take some pictures, satisfied by my performance for this first training of the year in the mountains. I've attached the Polar graph of the climbing: 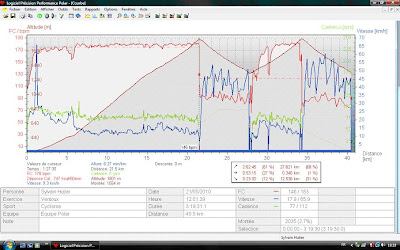 I start to descend on the same side to see if I encounter the Ventouse Men, wandering myself on their own challenge. I arrive at “Chalet Reynard”, I wait a little and when I start descending again, I can see my 2 buddies coming…!
Congratulations, they have already climbed the most difficult part and 6 kilometres remains to ride until the top. We discuss, we take a soda and the rise begins again, each one at our own pace.  I decide to stay with my two friends to take some pictures of them. With Adrien, we leave Manu until I decide to wait for him, during 15 minutes, victim of a jump of his chain. He mumbles a few words while passing in front of me “yeah fuck off this cycling and the Mont Ventoux!” he launches to me, the champion lost his nerves, incredible !  A few pictures later, I take the bike again, and join Adrien who forgets his pedals while stopping at the top! I capture this moment into the camera! Well done champion! 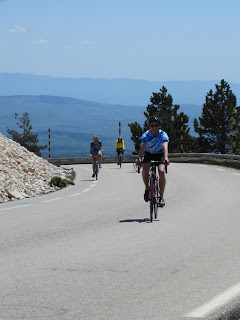 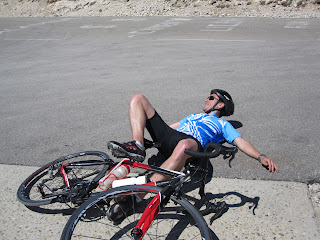 The pictures session starts again when Manu crosses the finish line with all the will and the rage needed at this time!
Then the emotion comes, Manu is proud and happy, and we are happy for him! He trained for that and pushed his limits, and it’s honestly that I say that he went on top of the Ventoux with all his heart and courage! Well done champion!  We enjoy the descent, and the hunger being felt, we stop for a beer and lasagnes at “Chalet Reynard”. Then, we return to Malaucène and , where on a terrace of a cafe, we discuss of this incredible day. The return to with the high speed train is much calmer as we sleep…
This challenge gives a good idea of what can be the climbing of the :
-     Manu, tennis player, slightly larger guy, but not very attracted by endurance climbed the mount in 2 hours and 45 minutes (with a 15/20 minutes break at “chalet Reynard”)
-     Adrien, footballer, rather thin, took 2h15 (with the same pause)
-     The 2 champions trained during two and half months on home trainers before the D-day!
As they say in : “is not insane who climbs the Ventoux, is insane who comes back!”…….. 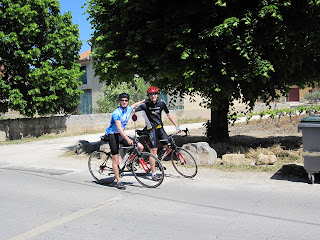